Regulation of Neuronal Communication (a.k.a., Synaptic Transmission) by the Ubiquitin and SUMO systems in C. elegans

(Links to each below)

The ability of neurons to communicate with one another through specialized cell-to-cell junctions known as synapses is critical for information processing and storage in the brain.  Aberrant neuronal signaling contributes to a number of neurological disorders, including epilepsy and Alzheimer’s disease.  Changes in the strength of synaptic signaling involve alterations in the function or abundance of synaptic proteins and occur during processes such as learning and memory. Current work in the Kowalski lab is focused on determining the role of two related and highly conserved enzymatic pathways in regulating synaptic transmission.  Enzymes belonging to these two pathways - the ubiquitin pathway and the SUMO (small ubiquitin-like modifier) pathway – are used by neurons and other cells to control protein abundance and activity.  Hundreds of enzymes exist with the ability to either add or remove ubiquitin and SUMO tags from target proteins; however, their functions and relevant substrates in neurons and at synapses are only beginning to be elucidated.  We hope that by obtaining a better understanding of the precise mechanisms by which neurons use the ubiquitin and SUMO pathways to control the localization, function, and abundance of synaptic proteins, we will gain valuable insights into how synaptic transmission is regulated in both normal and disease states while expanding our basic knowledge of these fundamental cellular signaling pathways.

Neurons are highly specialized cells whose functions include storing, processing, and transmitting information throughout the nervous system.  They do this by relaying chemical and electrical signals at specialized cellular junctions called synapses.  During synaptic transmission, chemical neurotransmitters are released from synaptic vesicles in the presynaptic (“sending”) cell and diffuse through the synaptic cleft to bind specific receptors on the surface of the postsynaptic (“receiving”) cell (Figure 1).  A single neuron from the mammalian hippocampus can make thousands of different synaptic connections, utilizing any one of a wide variety of different neurotransmitter receptors at each synapse.  Synaptic signaling may be either excitatory or inhibitory, depending on the nature of the receptor and the response that is elicited by its activation in the postsynaptic cell.   Proper nervous system function requires a carefully regulated balance of excitatory and inhibitory synaptic transmission, and several human neurological diseases - including seizure syndromes, mental retardation, schizophrenia, and neurodegenerative diseases such as Alzheimer’s and Parkinson’s Diseases - result from an imbalance in these two types of signals. Regardless of the nature of signaling at a given synapse, alterations in the abundance and/or activity of the hundreds of proteins required for either synaptic vesicle release or postsynaptic receptor signaling can affect the strength of synaptic transmission, which in turn impacts overall nervous system function. 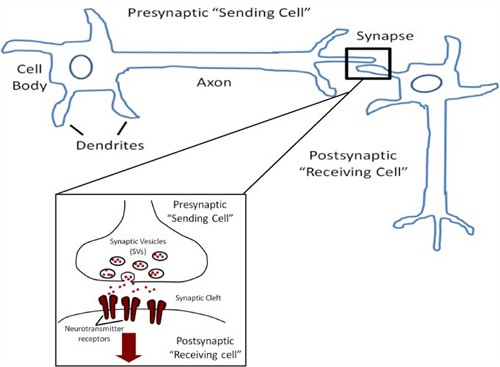 Figure 1. Schematic diagram of two neurons communicating through a synaptic connection. (Inset) Close-up view of the synapse.    The axon terminus of the presynaptic “sending cell” releases synaptic vesicles filled with chemical neurotransmitters into the synaptic cleft.  The neurotransmitters diffuse through the cleft to bind to specific receptors that reside in the plasma membrane of the postsynaptic “receiving cell”.  This interaction initiates signaling that may be either excitatory (shown) or inhibitory (not pictured) in the postsynaptic cell.

Covalent modification by small molecules or polypeptides is the central mechanism by which cells of all types control the amount, activity, and localization of proteins they use to carry out their diverse physiological processes.  Protein phosphorylation, for example, has been known for decades to regulate everything from the enzymatic activity of proteins to their binding partners and stability.  The addition of small polypeptide tags, called ubiquitin and SUMO (small ubiquitin-like modifier), is another important mechanism by which cells can alter protein function and abundance.  Special enzymes, called ligases, promote the attachment of ubiquitin or SUMO tags to lysine amino acids.  These ligases recognize particular amino acid motifs in their target proteins, providing specificity to the modification reactions.  Proteases that specifically remove ubiquitin and SUMO moieties counterbalance the activity of the ligases, thus serving as “off” switches for these pathways (Figure 2). 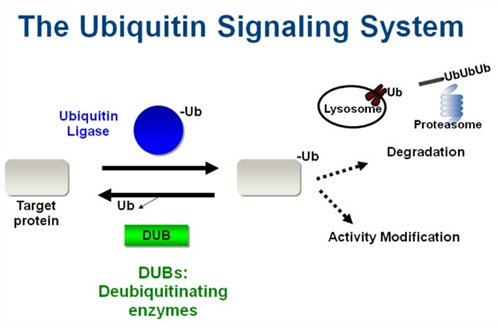 Figure 2. The ubiquitin signaling system is composed of hundreds of ubiquitin ligase enzymes that recognize specific target proteins to which they covalently attach ubiquitin polypeptides.  Ubiquitin specific proteases, also called deubiquitinating enzymes (DUBs), recognize and remove ubiquitin from target proteins.  One common outcome of protein ubiquitination is degradation.   Monoubiquitination of many transmembrane proteins targets them for degradation in the lysosome, while polyubiquitination of cytoplasmic proteins leads to their destruction in the proteasome.  In other instances, ubiquitination causes changes in protein activity rather than degradation.  Addition of the ubiquitin-like molecule SUMO to proteins also generally leads to changes in their activity/interactions.  SUMO addition to proteins is governed by families of ligases and proteases related to ubiquitin ligases and DUBs.

Numerous synaptic proteins are ubiquitinated or SUMOylated, and alterations in synaptic activity lead to changes in their ubiquitin and SUMO status.  Roles for several ubiquitin ligases in both vertebrate and C. elegans neurons have been identified; however, there are hundreds of ubiquitin and SUMO ligases and proteases encoded in the worm and human genomes. Many of these have broad expression patterns that include the nervous system, but their functions in neurons and their target proteins, are largely unknown.  There is still much to be learned about the regulation and relevant substrates of these enzymes and their potential control of synaptic transmission. 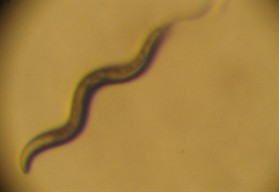 Caenorhabditis elegans (C. elegans) (Figure 3) is an excellent model organism for the genetic analysis of diverse biological questions and is a particularly tractable system for molecular neuroscience research.  These tiny roundworms have a simple nervous system consisting of a 302 neurons whose developmental fates and 7000 chemical synapses are all known, making them particularly useful for studying synapse biology.  In addition, simple behavioral assays can be used to measure the amount of synaptic transmission at specific synapses.  Studies in C. elegans are highly relevant to mammalian neurobiology since most synaptic genes in C. elegans are conserved in mammals and several genes critical for synaptic transmission in mammals were first identified in the worm.  Finally, a number of shared tools that facilitate screening approaches and genetic analyses are available through the C. elegans research community.  These resources include a complete and annotated genome sequence, a genome-wide RNA interference (RNAi) library (which can be used to reduce the expression of any C. elegans gene), an extensive protein interaction map, and large collections of previously generated mutants.

To study the role of the ubiquitin and SUMO systems in regulating synaptic transmission in the worm, we are currently focusing on one well-characterized synapse, the neuromuscular junction (NMJ).  The worm NMJ, like that in humans, uses the neurotransmitter, acetylcholine (ACh) to signal for muscle contraction.  The action of ACh, which is released by excitatory motorneurons, is counterbalanced by the inhibitory neurotransmitter, GABA, released from inhibitory motorneurons (Figure 4A).  A balance between the muscle contraction caused by excitatory cholinergic signaling and the relaxation induced by inhibitory GABAergic transmission is essential for the ability of the animal to move in its typical sinusoidal crawling pattern.  Similarly, a tightly regulated balance of excitatory and inhibitory synaptic signaling is critical for proper functioning of our own nervous systems (see above)!

At the worm NMJ, the net amount of excitatory signaling into the postsynaptic muscle can be quantified using a simple behavioral assay, called the aldicarb assay.  Aldicarb (an acetylcholine esterase inhibitor) indirectly increases the amount of ACh in the synaptic cleft, resulting in muscle hypercontraction and paralysis over time(Figure 4B).  Wild type worms paralyze at a given rate in the presence of aldicarb; mutants that cause increased cholinergic transmission paralyze more quickly (aldicarb hypersensitive) and those causing decreased transmission paralyze more slowly (aldicarb resistant).

Figure 4.  (A) Schematic of the C. elegans neuromuscular junction, which is regulated by a balance between excitatory cholinergic (ACh) signals and inhibitory GABAergic signals that are released from separate classes of presynaptic motorneurons and bind to ACh or GABA-specific receptors located in the postsynaptic muscle.  The drug aldicarb promotes a build-up of ACh in the synaptic cleft where it continues to bind to ACh receptors and signals for continued muscle contraction.  This muscle hyper- contraction leads to eventual paralysis of the worm.  (B) Possible aldicarb assay outcomes.   Aldicarb hypersensitivity in mutant animals may be caused by either too much cholinergic or too little GABAergic signaling, whereas aldicarb resistance could be due to either of the opposite situations.

We are currently using the aldicarb assay, along with other pharmacological assays that assess different aspects of NMJ function, to identify and characterize ubiquitin and SUMO family enzymes involved in regulating either excitatory and/or inhibitory synaptic signaling at the NMJ.   To do this, we are testing the effects of loss of function of these enzymes using both RNA interference screening and candidate genetic mutant analyses.  Following the identification of an enzyme involved in regulating NMJ transmission, we are using a combination of genetic (e.g., double mutant epistasis experiments), cell biological (e.g., imaging, cell type specific rescue experiments) and biochemical approaches (e.g., immunoprecipitations, Western blots) to identify and characterize relevant substrates of those enzymes that mediate the effects on NMJ signaling.  Our long term goals for this research are to contribute to the general understanding of ubiquitin enzyme biology and to provide new information about how the activity of ubiquitin and related pathways impacts nervous system function.